Reprinted with permission from The Watch

A person driving a Toyota Prius through Ridgway wouldn’t garner a second glance nowadays — but when a Hollywood cowboy famous for riding his horse through the streets of New York City brought one of these full-hybrid electric vehicles to town shortly after they were released stateside in 2000, people took notice.

Actor Dennis Weaver first purchased property in the town of Ridgway in 1988, wanting to escape the hustle-bustle of L.A. and find a place to grow his own food. He made the move permanent in 1990, and two years later, Weaver was living in the most luxurious Earthship house that New Mexico architect Michael Reynolds could construct, an ode to Weaver’s values of environmental sustainability. 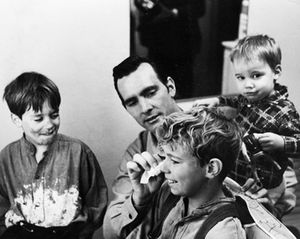 Though the actor passed away in 2006, his Ridgway legacy remains. Dennis Weaver Memorial Park preserves his unique place in history here, along the Uncompahgre River corridor, for generations to come, proving that the actor best known for his roles in television series such as “Gunsmoke” and “McCloud” was much more than a Western film star.

His longtime personal assistant, Ridgway resident Alice Billings, shared stories of how the Weaver clan struggled during the Great Depression in 1929, as most Americans did, becoming sharecroppers who would often travel west to find food to ration with other farmers.

“That’s where he got his love of the land from,” Billings said. “That’s how he grew up.”

A young thespian in the making, Weaver decided he wanted to be an actor around the age of 7, according to Billings; from then on, he focused on his silver screen dreams.

As a track star at the University of Oklahoma, where he studied drama, breaking into show business was Weaver’s main focus. Weaver held several school track records as a Sooner, and after a stint as a pilot for the United States Navy during World War II, he decided to try out for the 1948 U.S. Olympic Decathlon Team. The trials were held in New York City.

Weaver came in sixth in the Olympic trials — but only the top three finishers made the team. Billings, who admired Weaver’s athleticism, shared an anecdote that might have helped to explain his less-than-spectacular finish.

“He’d spend all day in New York City reading scripts for different roles,” she said. “He had been sleeping on a friend’s floor — so when the trials came, he had rubbery legs.”

Failed Olympic dreams aside, Weaver’s dedication to the craft carried on through a period of lean years, when he held odd jobs such as selling vacuums and women’s hosiery to support his family as a struggling actor.

He was employed as a flower deliveryman in 1955 when he got the news he landed the role of Chester Goode in the new American television series “Gunsmoke.”

A Cowboy Comes To Life

Although Weaver had made his movie debut in 1952 in “The Redhead from Wyoming,” his big break came in “Gunsmoke,” in which he played Marshal Matt Dillon’s assistant, Chester Goode.

The longest-running live action TV series in U.S. history, “Gunsmoke” was set in Dodge City, Kansas during the settlement of the American West. It was on-air from 1955-75.

Weaver won an Emmy Award for Best Supporting Actor in 1959 for his portrayal of Chester, and remained in the role until 1964. He went on to star in the short-lived TV series “Gentle Ben,” (1967-69), about a man and his camaraderie with a black bear, a “spaghetti Western” produced by Dino De Laurenitis titled “A Man Called Sledge” (1970), in which he co-starred with James Garner, and “Duel” (1971), Steven Spielberg’s full-length directing debut about an anonymous, murderous driver behind the wheel of a menacing tanker truck (Weaver had the lead role as the terrified-but-plucky motorist pursued by the tanker).

The role that most personified Weaver, though, was that of Deputy Marshal Sam McCloud — a Taos, New Mexico lawman on loan to the New York City Police Department as a special investigator — in the television series “McCloud” (1970-77), Billings said.

Riding a horse along New York City’s Fifth Avenue may have seemed odd for some, but Billings said it was the role that most suited Weaver.

“I would say that was his favorite role,” she said, though not one without its risks when you consider Weaver’s costar was an innately skittish equine — and that the series took place on slick pavement in noisy, distraction-filled Manhattan. “While Dennis loved animals and loved horses, he only rode when they paid him to ride. He used to say that,” Billings recalled drily. “He was a good horseman.” (According to Billings, Weaver owned a few racehorses in the 1960s, and even helped a business partner raise llamas, but never had horses of his own.)

Billings first met Weaver on the set of “McCloud” in the early 1970s, when she was working as a photographer. She became his full-time personal assistant in 1974.

“People may just see a celebrity and an actor, but Dennis was always an activist. He was at times a political activist also. He always saw the plight of the little guy,” she said.

She explained how as the president of the Screen Actors Guild from 1973-75, Weaver negotiated a contract that gave actors 100 percent of the residual revenue after the second run of their show.

“That was all because of Dennis’s negotiations,” she said. “He did a lot of good behind the scenes.”

Home On The Range

A Hollywood mainstay already, Ridgway came calling in the 1980s after Weaver learned of the area from his three sons, Rick, Rusty and Robby, who would travel to Telluride to ski.

In an effort to find enough land on which he could grow his own food, Weaver, along with his wife, Gerry, settled on Ridgway.

“He was definitely doing some cool things, like the Institute of Ecolonomics (a term coined by Weaver combining “Economics” and “Ecology”). When he came to Ridgway that was his big thing,” Clark said. “He drove a Prius long before most people knew what they were. He was really ahead of his time.”

The Weavers founded the Institute of Ecolonomics in 1993 in an effort “to illustrate the marriage between our ecology and economy,” according to the organization’s official website, ecolonomics.org.

“If we are to leave a planet that will sustain life for future generations, we have to have two things: a sustainable economy and a sustainable environment, and if we fail in achieving either we will suffer greatly” Weaver said, according to the website.

Clark said the Weavers were always out and about around town and that he even worked on their computer (Clark’s business is called The Mac Doctor).

“Dennis was great. He was gracious. He was friendly. He was very nice,” Clark said.

The Weavers were actively involved in the community, Billings added, even building the so-called Big Barn, located just east of U.S. Highway 550, where community dances were held.

“He built it because he and Gerry were great dancers. He loved to two-step,” she said. “We had dance lessons there. We had shows and fun. It was great for the community. We had people coming from all over to dance.”

The barn was eventually sold; it is now the Ridgway Christian Center.

In addition to performing as a thespian, Weaver performed acts of charity. His nonprofit organization, Love Is Feeding Everyone, helped feed nearly 160,000 families in need every week around Los Angeles during the 1980s.

Another Weaver-led initiative, based in Ridgway, was plans for an environmentally friendly housing development along the Uncompahgre River corridor, in the modern-day RiverSage subdivision area.

Unfortunately, the plans were never fully executed while Weaver was alive (he died on Feb. 24, 2006 of complications from cancer), and the family ended up donating 60 acres of land to the town. Shortly thereafter, the RiverSage development and the Dennis Weaver Memorial Park were created.

“We gained an incredible asset in riverfront property that will now be protected forever in return for allowing some large-lot, family homes,” Clark said. “That’s just amazing. A lot of communities would die for that.”

The Weavers are still actively involved in the community, Clark said. Sons Rick and Rusty still live in town (Gerry Weaver remained in Ridgway up until her death last year). Rick was a council member for several years and Rusty helps maintain Dennis Weaver Memorial Park. Over the years, the Weavers have provided several scholarships to graduating Ridgway High School seniors.

“They have given and donated to the town on a regular basis. They bought trail signs for the trail out there (in the park). They’ve been very generous. They are very kind people,” Ridgway Town Manager Jennifer Coates said.

Coates explained that an annual Plein Air event, presented by Public Art Ridgway Colorado (PARC) and the Weaver Family Foundation, invites artists to take in the inspirational views, including the bald eagle sculpture, at the park, to create artistic works. The event features a contest in which the town displays the winning painting in town hall.

The Plein Air event has proved very popular: “They get a really good showing,” Coates said.

Billings remains involved with the Weaver’s estate (over the past year, both of Weaver’s Ridgway properties, the Earthship and most recently, another family home, have been sold). She explained how she spent the last couple of weeks finishing up the proper paperwork to complete the sale of the house Gerry lived in. Now, she’s sorting through memorabilia.

“It’s kind of like the end of an era,” she said of the recent sales.

As a ranch owner in town, Billings is quick to reminisce about those early years when people would ride horses along main street and hitch them outside their favorite watering hole. She remembers a photo of herself and Dennis riding next to each other, taken along Sherman Street during a Labor Day parade.

“That’s the only time we rode together,” she said.

While Ridgway has changed in the 30 years since Weaver first came to town, the sculpture of an eagle in the park that bears his name still soars, forever suspended in flight.

It is a beacon for those to learn about a man who, in real life, was more engaged in preserving the Earth than pursuing criminals on horseback in New York City — a man more compelled by actual environmental sustainability in his new Western home than in fictional gunfights in the Old West.

The Ridgway Area Chamber of Commerce promotes business and community development in the Town of Ridgway and the surrounding area. The Ridgway Visitor Center, located at 150 Racecourse Road, Ridgway, Colorado 81432 (across from Citizens Bank off of HWY 62), The visitor center is closed as of October 1st and will reopen Memorial Day weekend.